The 46th running of the Galloway Hills Rally will mark the 20th anniversary of The Armstrong Group partnership with the event, as the popular forest stage rally gets set for its biggest event yet on 14th September.

The Armstrong Group first teamed up with the event in 2000 and its rich heritage of rallying roots in the company have helped to forge an unrivalled relationship with the motorsport event which sees the firm once again become a title sponsor.

Founded in 1965, the firm began as an agricultural contractor serving the Kirkcudbrightshire farming community and has developed into a mainstay of the region. With five separate outlets including construction, waste management, surfacing, properties, forestry and renewables, The Armstrong Group is one of Scotland and North West England’s leading contractors from their base in Dumfries.

Organised by Solway, Machars and East Ayrshire Car Clubs, the Galloway Hills Rally has always held a popular slot on the rallying calendar and the rally is steeped in history. With classic Scottish forest tests such as Cairn Edward, Black Loch and Glengap on its books, it has attracted a wealth of top-class names with the likes of M-Sport Ford boss Malcolm Wilson and Toyota Gazoo Racing WRC factory driver Kris Meeke’s names on the winner’s trophy. 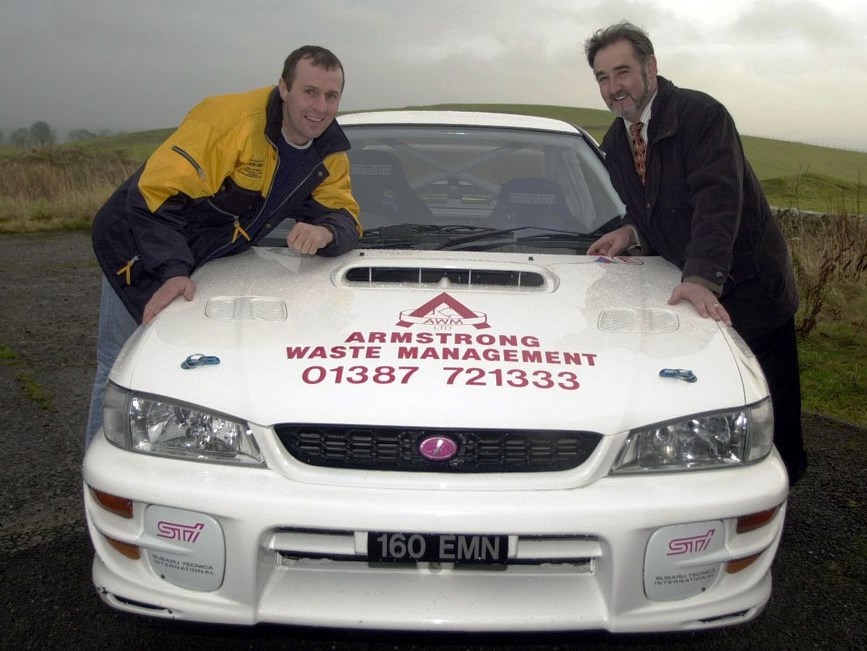 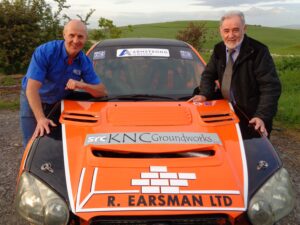 20 years ago the Armstrong Group began its partnership with the Galloway Hills Rally.
Director Jock Armstrong (L) with Norman Gowans (R) in 2000 (top) and 2019 (bottom)

The event traditionally also attracts a significant contingent from across the Irish sea, in part thanks to a grant from Dumfries and Galloway Council’s Major Festivals and Events Strategy 2018-2021, which has historically seen one hundred per-cent of the grant used to attract crews to the region. In the past, this has included wholly subsidised ferry crossings from Northern Ireland and entry fee rebate competitions to encourage crews to enter.

This year, the event offers a wide range of options for competitors of all levels to compete, with a nine stage 75-mile option or a shorter five stage 45-mile event available. Coupled with a new format and location, the rally is set to see some of the best drivers in the business head for the South West of Scotland in September.

Armstrong Group Director Jock Armstrong is a front running Scottish Rally Championship driver himself, and along with former SEAT factory driver and Armstrong Group Services Director Barbara Armstrong and the whole Armstrong family, the firm is delighted to be backing the rally for the 20th year.

“As a family, we are so pleased that The Armstrong Group has sponsored the event for 20 years” says Jock Armstrong, Armstrong Group Director and nine-times Galloway Hills Rally winner. “Thanks to the fantastic and dedicated committee and car clubs involved, it has grown over the years and has been won by many people who have gone on to be champions. I’m looking forward to seeing all the local fans in the stages in September. I sadly can’t win the Scottish Rally Championship this year, but I will be doing my best to win the rally!”

Barbara Armstrong, Armstrong Group Services Director and multiple British Ladies Rally Champion has a strong affinity with the event. “I would have loved to have had the Galloway Hills Rally as a round of the BRC when I drove for SEAT” she says. “I never imagined it would ever happen, and now to be honoured as the last round of the Championship is very exciting. I was lucky, and when I drove for SEAT, if I was ever asked what rally I would like to compete on, outside the BRC, I only had one answer: ‘The Galloway Hills’. I hope competitors new to this event for the first time, enjoy the stages and the after event party as much as we all do.”

Clerk of the Course Michael Riddick is delighted to be able to celebrate the partnership with the Armstrong Group in 2019. “This year will be such an iconic event for the Galloway Hills Rally thanks to hosting the final rounds of both the British and Scottish Championships, and the organising team are truly honoured to be welcoming the Armstrong Group back for the twentieth year” he says. “It’s a significant milestone for us and we would like to thank the firm and the Armstrong family for their loyal support and dedication towards the rally over the years and we look forward to celebrating many more in the future.”