Aberdovey’s Tom Cave would also scoop honours in the longer 75-mile event, taking a convincing win at the final round of the British Rally Championship which took place in the heart of the Dumfries and Galloway forests.

However, Cave’s efforts were not enough to stop Matt Edwards being crowned British Rally Champion, with his third place on the rostrum enough to give the Welshman a back-to-back BRC title.

Whilst the Scottish Championship already had their champion, the BRC would have the title fight played out across the 75-mile event which would house nine stages and lined up a battle-royale in classic forest tests such as Dalbeattie, Black Loch and Glengap. 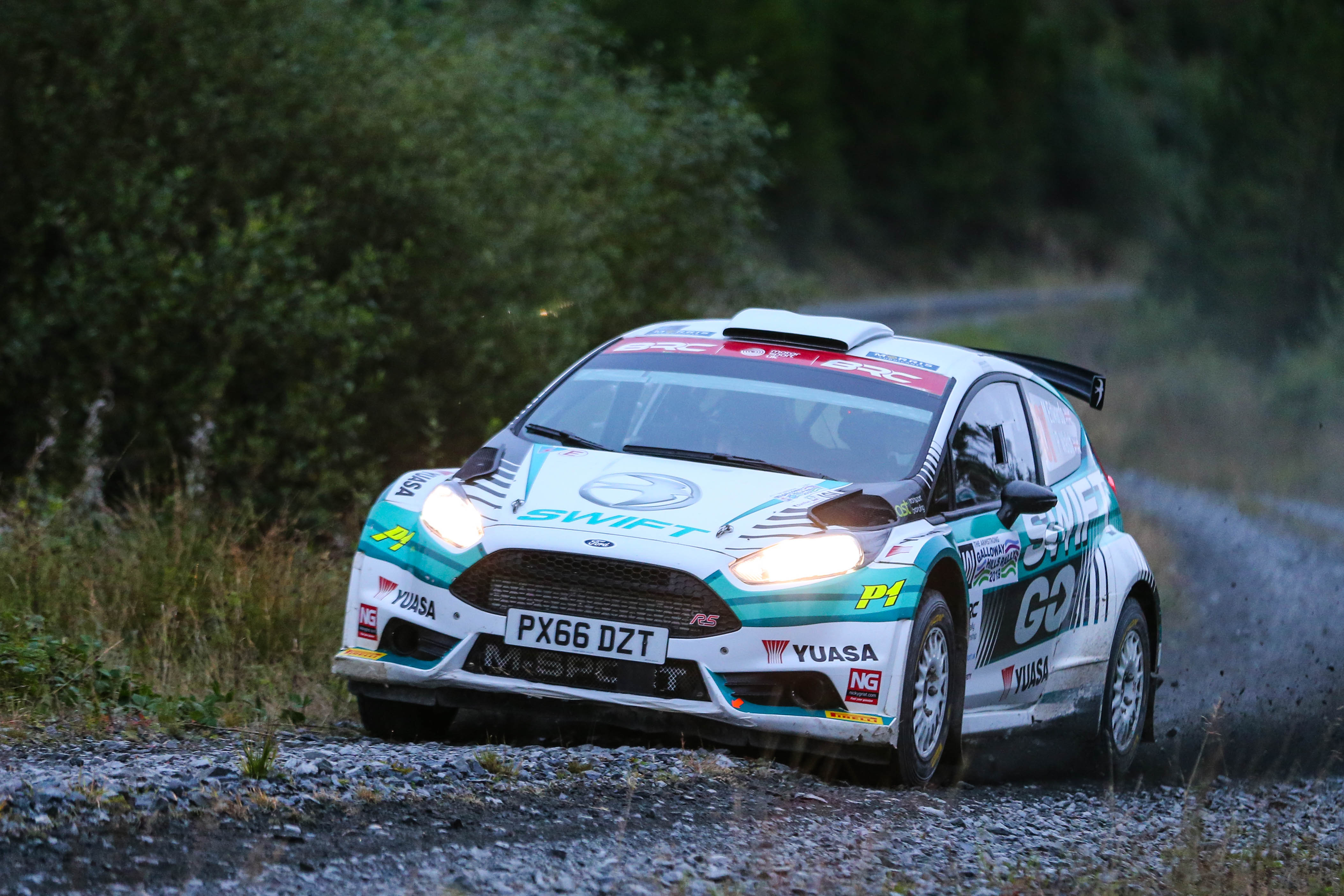 Cave, piloting his Hyundai i20 R5 with Dale Bowen in the co-driver’s seat, were on fine form all day long, setting fastest time on each stage of the event to take the win by over 54 seconds from Northern Ireland’s Jonny Greer and Welshman Dai Roberts in their Ford Fiesta R5.

Whilst a win on the final round was important for Cave, all Edwards and Patrick Walsh needed to do to clinch the title was take their M-Sport Fiesta to seventh or higher. Indeed, they did so in fine style, enjoying a measured drive throughout the day to finish third – handing Edwards his second British title of his career.

Cave was delighted to secure the Galloway Hills win on its maiden BRC qualifying event, spraying the champagne at the ceremonial finish at Threave Garden and Estate.

“We have a really good day in the car and we just came out fighting” said Cave. “We did what we had to do to try and win the championship, but it wasn’t quite enough for us. Well done to Matt and Patrick for the championship today but we all did a great job and I’m pleased with how its gone. It’s nice to seal the year off with a dominant win today and I knew in my head we could be competitive. It’s been a great day in the stages, they are fantastic here in Scotland.”

James Wilson enjoyed a trouble-free run to fourth place as he and Arthur Kierans adapted to a Fiesta R5 for the first time, with the Junior BRC battle raging just behind them. That honour went to fellow Northern Irishman William Creighton who scooped the JBRC honours with Liam Regan alongside in their Peugeot 208 R2.

But all eyes were not just on the BRC leader board, as the Scottish Rally Championship contenders were in for a tough battle, spread across five stages and 45-miles of flat-out driving. 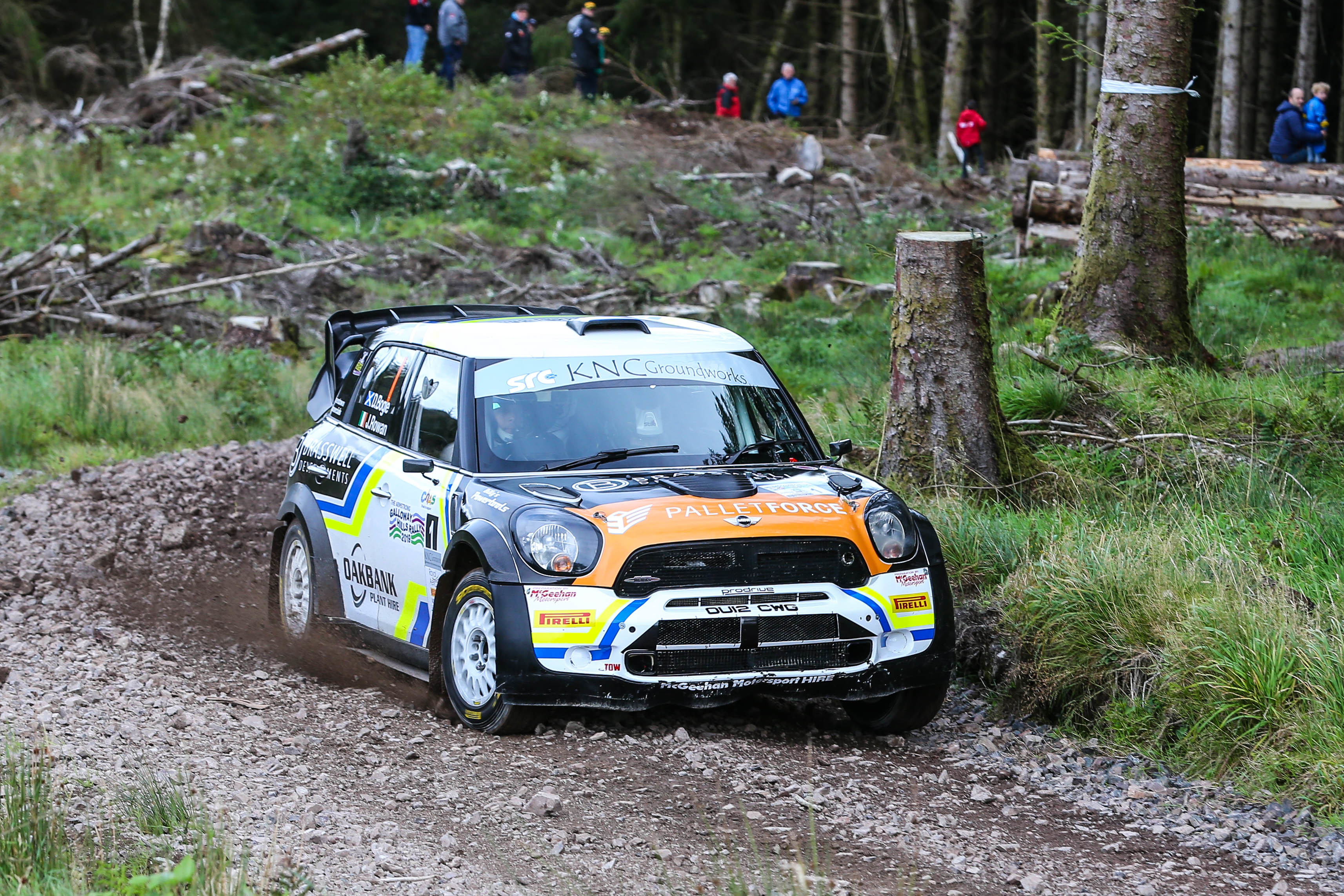 Driving a Mini JCW WRC for the very first time, David Bogie stormed to the win by 1min 08sec over Jock Armstrong who had suffered from a puncture and tyre issues during the day. Bogie and co-driver John Rowan enjoyed a clean sweep – winning every stage of the 45-mile event.

The five-time SRC Champion was happy with his performance in the new car. “It’s been a good day and of course the first time out in the Mini so it took us a wee while to get used to the car, but as the day went on we got quicker and quicker and got the result that we wanted” said Bogie.

Armstrong, from Castle Douglas, would overcome a stage one puncture in his Subaru Impreza to slot into second, not quite taking his tenth ‘Hills’ victory, with Mitsubishi pilot Michael Binnie securing his maiden SRC podium in third with Claire Mole alongside.

Other notable local results included Dumfries driver Mark McCulloch who secured the two-wheel-drive win in his Ford Escort Mk2 with Co-Driver Michael Hendry alongside.  Iain Wilson, who handed over the reigns of the brand-new Jas P Wilson facility in Dalbeattie to the event for the Friday and Saturday morning Rally HQ, did enough to secure the SRC two-wheel-drive championship on his home rally.

A bumper entry of over 90 cars started both events with many crews making the trip from across the UK and Ireland to the region for the event. Many of which, have taken advantage of a range of competitor incentives, all made possible by a grant from Dumfries and Galloway Council’s Major Festivals and Events Strategy 2018-2021.

Spectators had flocked into the forests to see the action and despite a few delays during the day, Clerk of the Course Michael Riddick was honoured to host the SRC and BRC at the Galloway Hills Rally.

“It’s been an amazing spectacle to see the best drivers in Britain and Scotland converge in Dalbeattie for the final rounds of their championships, which has perhaps predictably attracted bumper numbers of spectators in the stages to watch the action today” said Riddick.

“That has been challenging at times, especially effective running two rallies, and we were hit with a few delays which were caused by these spectator issues, which caused us to finish a little later that we hoped at the Threave. We would like to thank all our marshals, officials and spectators for their patience today, and hope that the action in the stages made up for that.  We look forward to seeing what 2020 holds for the event, and hope everyone will make the return trip to the region next year”.